Access to housing is not Science Fiction (TAF! workshop in Basque Country)

The invitation came from Stop Evictions Gipuzkoa (Stop Desahucios Gipuzkoa), with one condition: the workshop must revolve around the right to housing. We immediately said yes. And the results could not have been better.

All the participants shared an interest in photography and social concerns, but aside from this they were a mixed bunch that included architects, journalists, photographers, activists and designers.

It’s not hard to imagine what came next: first, a photo session where we had a ball and then the design, layout, and printing of a series of ads. We created an entire fake campaign in purest Guerrilla Communication style. Two big (3 x 2 meters) posters pasted onto the façade of the Teatro Bellas Artes (Fine Arts Theater) announced that Kutxa Bank had changed its mind about the evictions. Now, instead of a hotel, this Basque bank was going to recondition the building and fit it out to house the families that it had evicted from their homes for failing to meet mortgage repayments. We invented this hoax for two reasons: first, to undermine people’s confidence in banks (even further); secondly, to force Kutxa to publicly deny the story. As it did.

The image we chose for the posters was a young woman who resembled Princess Leia, carrying the Darth Vader helmet under her arm: a perfect match for the slogan: “Coming soon: 90 homes for evicted families. Access to housing is not science fiction.” The other poster was in Basque and said “Zinez bizi”, which means something like “Live a Movie Life”, and then: “Today this theatre is ours. Tomorrow it is everybody’s.” The image shows a young man holding a clapperboard with the words: “90 homes for people who have been evicted. 9 evictions each week in Guipúzcoa. Over 9000 in the Basque Autonomous Community.”

Imagine the surprise on the faces of passers-by! People walked past open-mouthed, retraced their steps again and again – they couldn’t believe their eyes. San Sebastián is a small city, and it didn’t take long for our hoax to reach thousands of people. That was when we launched part two of the plan. We created the hashtag #AupaKutxa (#bravoKutxa) and used to it spread the campaign photos online on Twitter, along with words of praise and compliments for Kutxa. The Net was quick to respond: “It’s about time you did something like this”, “I can’t believe a bank has done this”, “ #KutxaSocial does some real social work at last”. After a few hours of this, Kutxa Bank had no choice but to respond and deny authorship of the posters. And then we started spreading their denial using the hashtag #KutxaDesmiente (#KutxaDenies). It was quite funny, from love one moment to hate the next: “The idea of #KutxaBank supporting evicted families is Science Fiction.”

The action at Teatro Bellas Artes lasted eleven days. The City Council removed the posters on the very day that VICE magazine published an interview with Enmedio in which we discussed this action, among many other things. More fuel on the fire, more media buzz. Banks, tremble.

By the by, Zinez bizi doesn’t just mean “live a movie life”, it also means “live for real”, and that’s what the group of people who took part in the workshop have started to do. Just yesterday they announced that they are planning new actions. 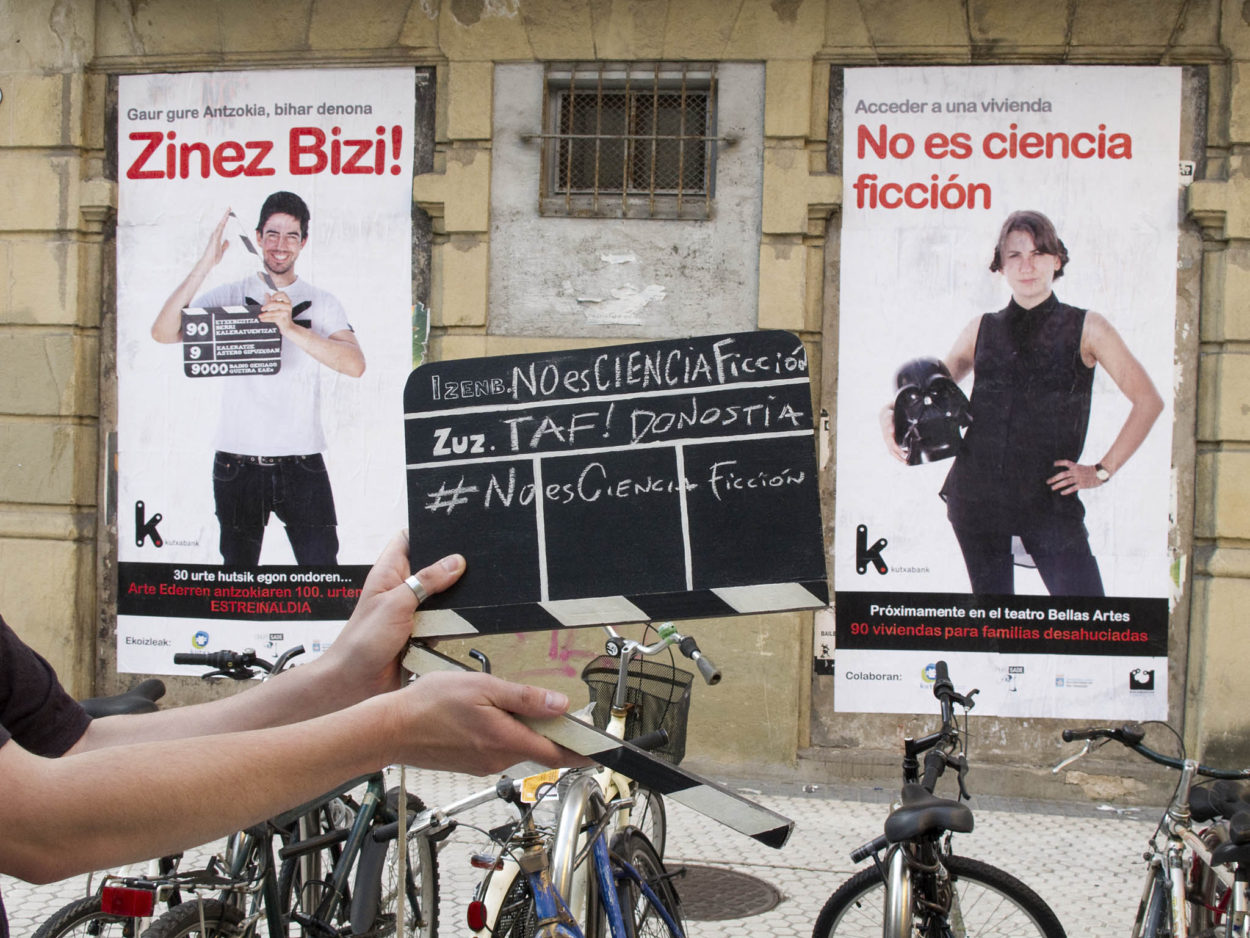 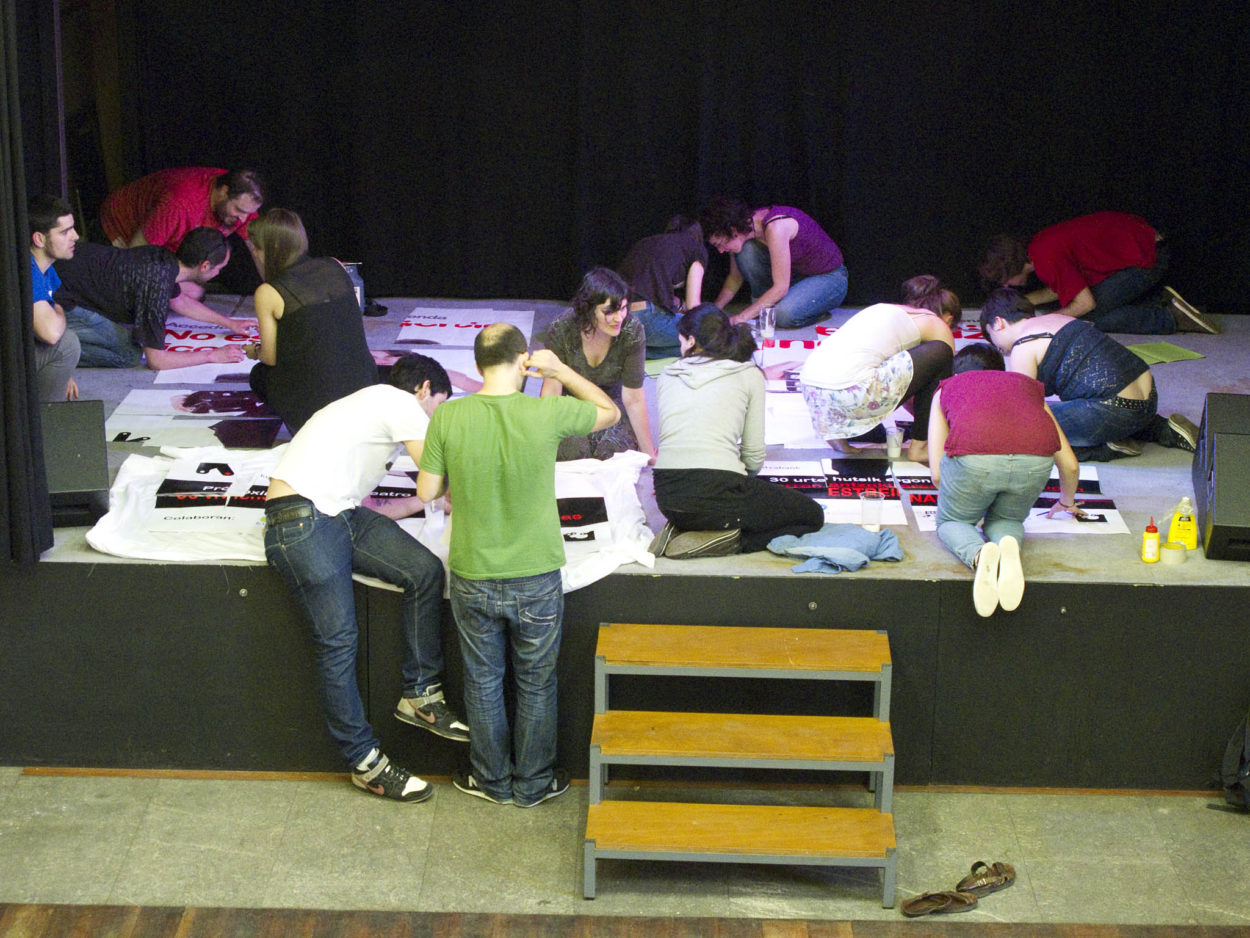 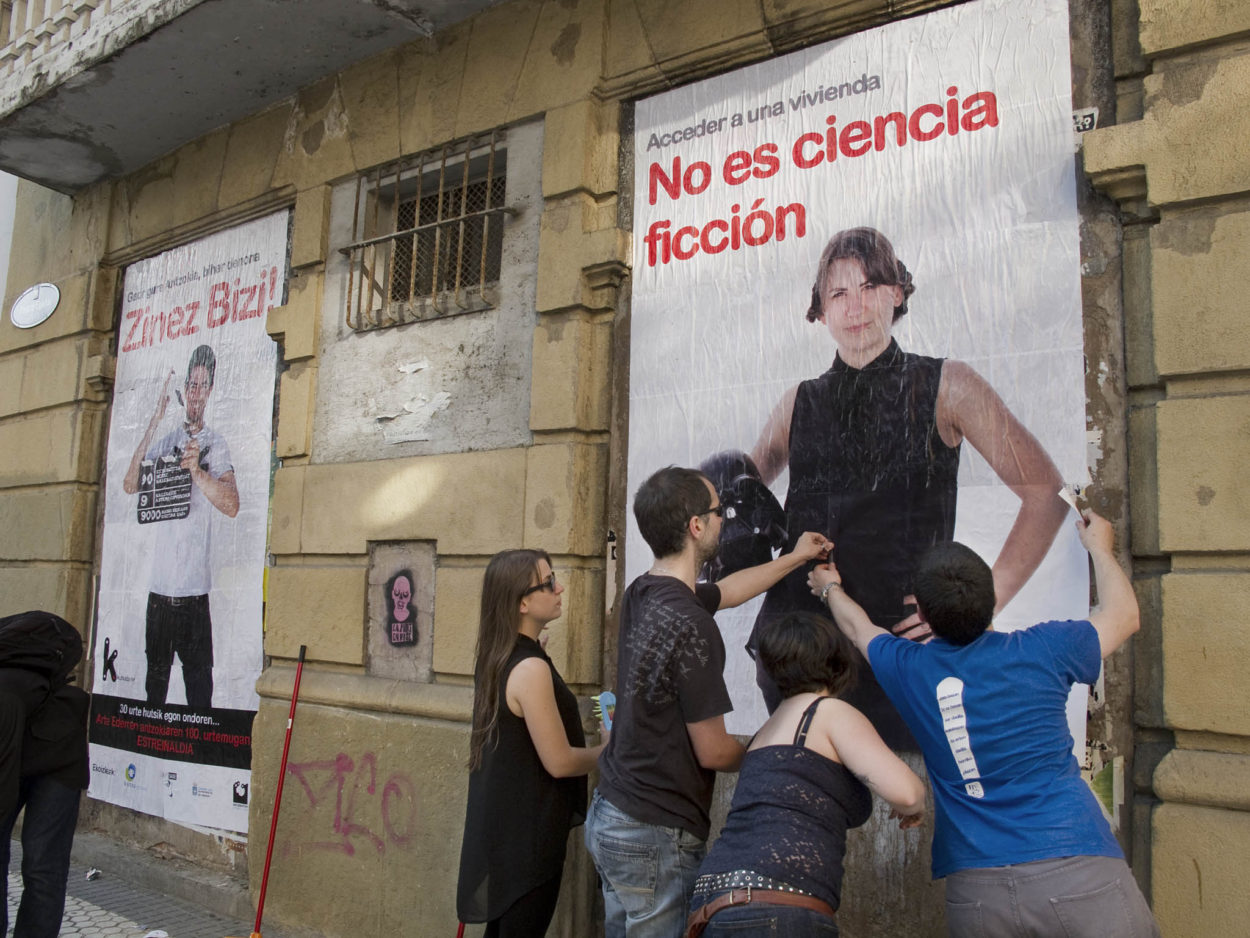 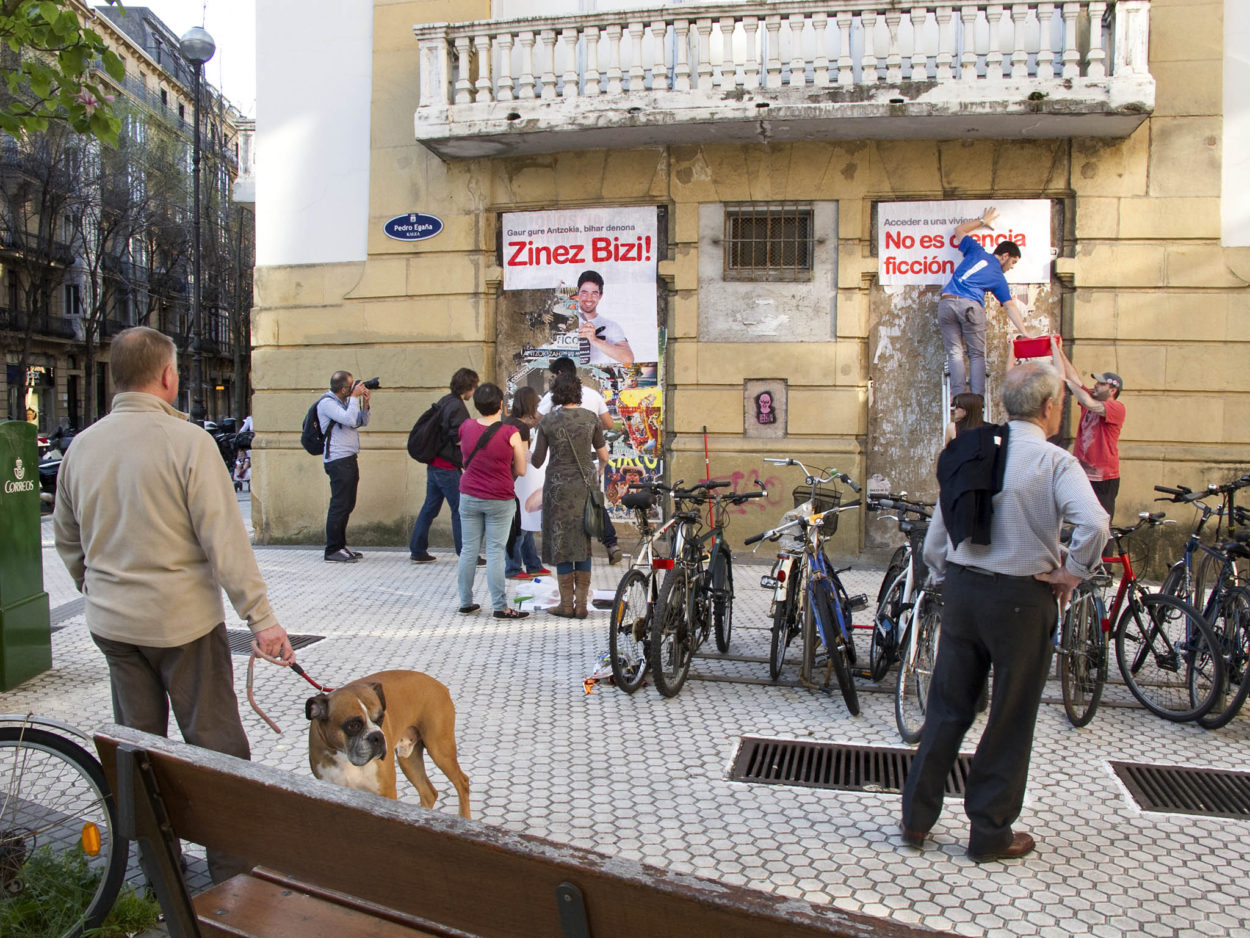 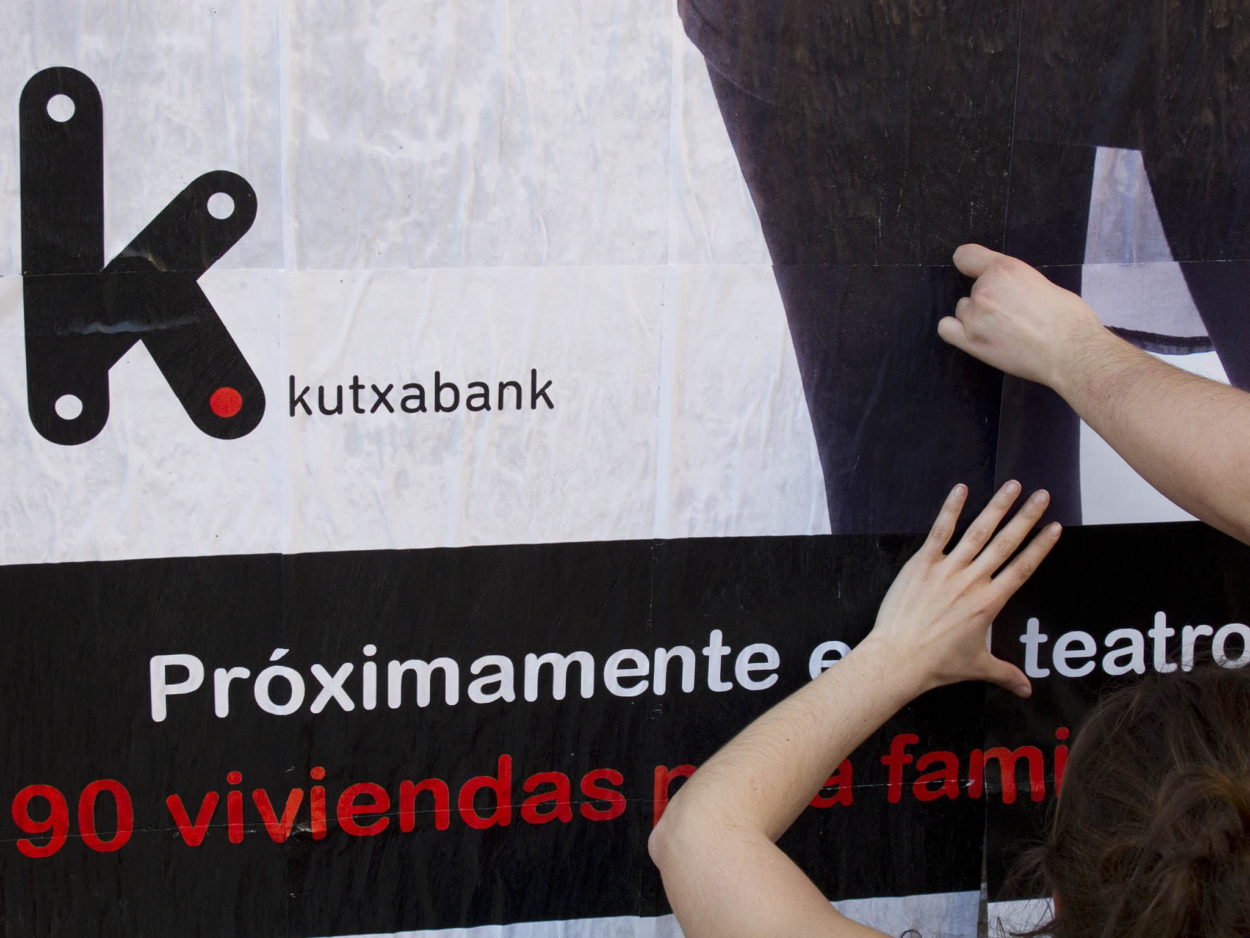 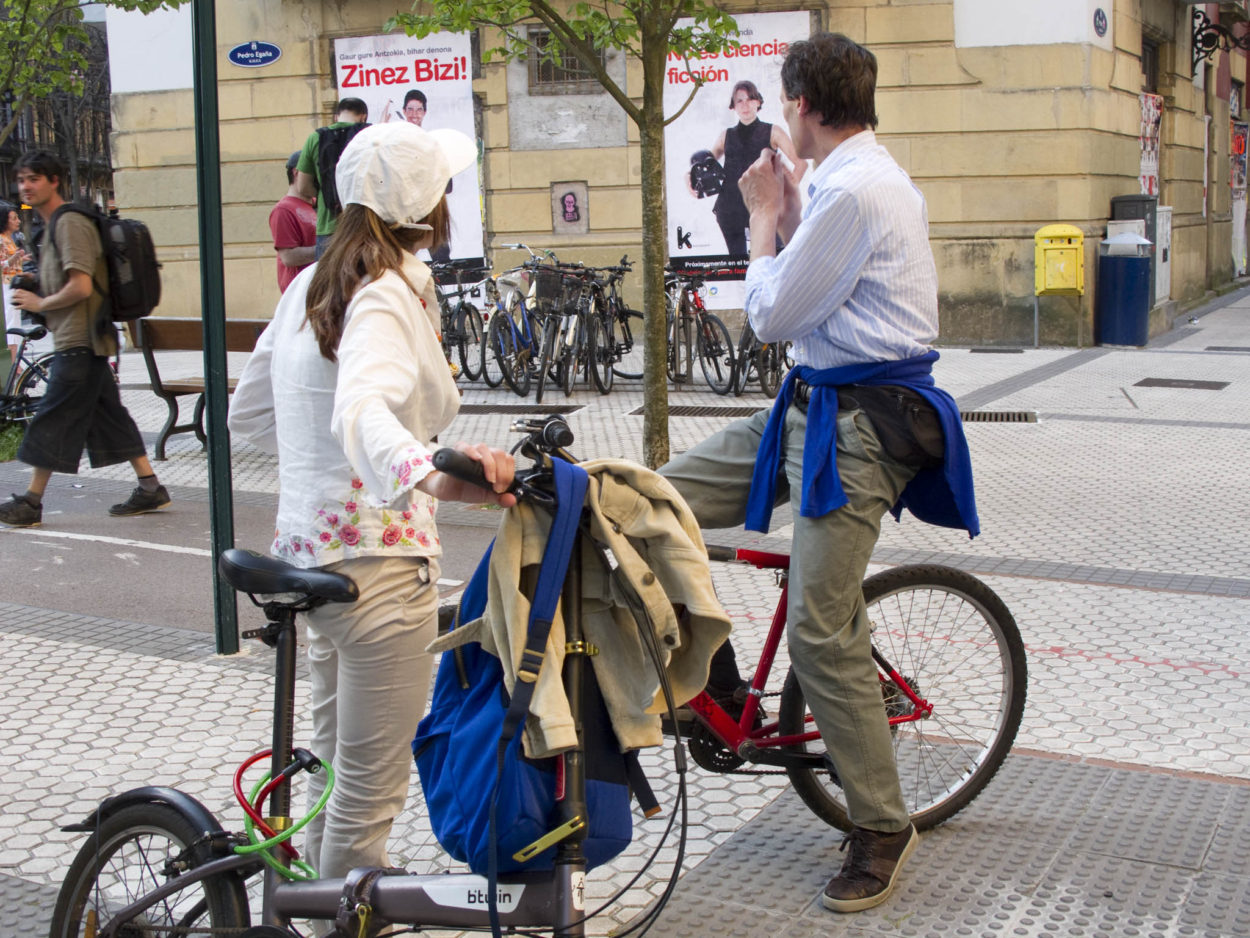 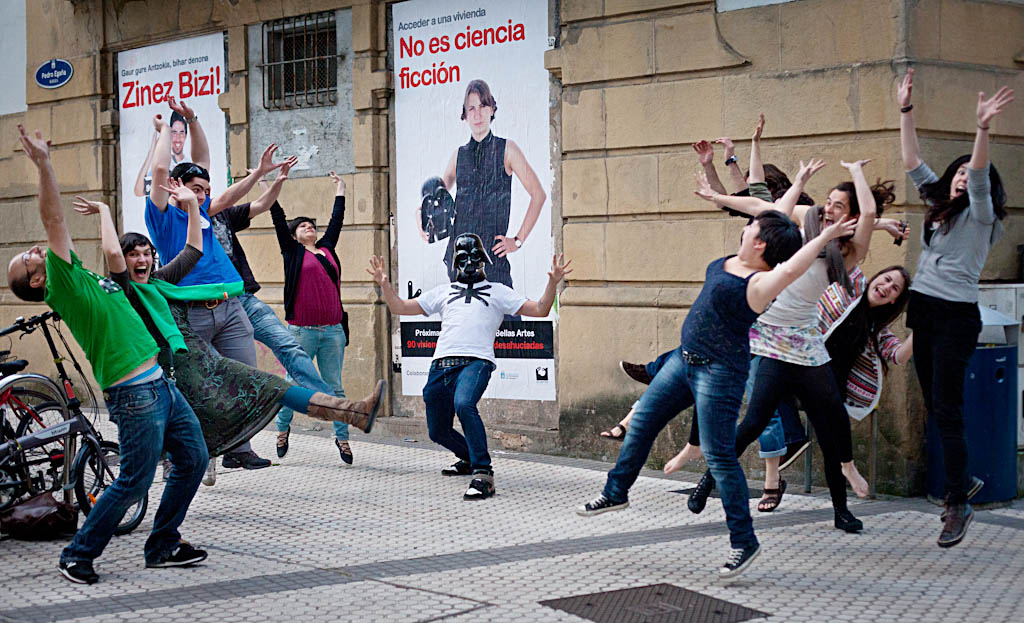